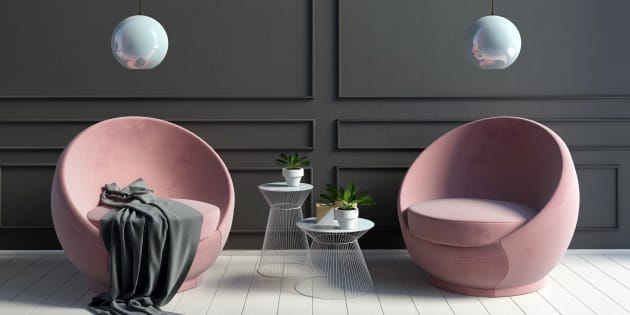 GETTY IMAGES/ISTOCKPHOTO
Velvet and millennial pink are both here to stay.

If you (like literally millions of other Aussies) were an avid viewer of The Block, chances are you’ve been bitten with the decorating bug.

There’s something about a reno show that stirs up the creative juices and makes you want to chuck out half of your own tired belongings and head to the closest homemaker centre.

Before you do so, do you know what trends are ‘in’? We asked Jade Nottage, Director at TomMarkHenry to help us understand what trends to look for.

First up, is millennial pink sticking around?

Millennial pink is a colour that defines a generation and was officially named back in 2016, yet its popularity only grew in 2017. If you’re a fan we have good news — it’s not going anywhere.

“We feel that pink will stick around for another season for sure, maybe not with the same intensity, but as an accent colour,” Nottage told HuffPost Australia.

As for what other colours to look out for? Think retro.

“We went to Milan this year for the Salone Del Mobile and noticed a lot of warm, almost retro colours were popular. Think terracotta, browns, deep pinks, burgundy and teal, with splashes of bright blue and orange.”

Is copper here to stay as well?

Rose gold exploded in the interior scene a few years back and while that has died down, the use of copper has remained.

“Copper is a classic metal, so we feel it isn’t going away, but again, it may not be used as commonly as we’ve seen it previously. Copper has its place in interiors, but we feel people need to be selective about where they use it,” Nottage said.

What fabrics should we look for?

The use of linen on furniture and in bedding is big and that’s expected to stick around for 2018. It’s casual and laid back which reflects the Aussie attitude.

On the other end of the scale is lush velvet in rich tones of turquoise and ruby.

“We love jewel tone velvet so definitely hope it is a material that is here to stay. We saw lots of velvet in Milan so it’s retro qualities are clearly being re-appreciated.”

As for Nottage’s personal faves, she found it hard to pinpoint just one.

“There are too many! I love deep, earthy colours like forest green, navy, olive and burgundy. I resonate with these colours because they have so much depth but are not too vibrant and primary. Using multiple colours in an interior can be hard but the earthy tones work so well together and create a level of sophistication,” Nottage said.

If you’re heading out this coming weekend to update your look, the take home is to look for rich retro colours and lush timbers.

“Next season we will see lots of colour and a nod to retro inspired design, including the use of rich, walnut coloured timber, which we absolutely love.”